I was bitterly disappointed by this film, I think it was because I saw it had Kate Winslet in it and I thought it was going to be a great film. Only it just seemed to be really bitty. There was hardly any back story, there’s not real character introduction or character progression and you sit there wondering why certain characters have behaved the way they do…and you don’t really know why.

I think as a film it just didn’t work too well and maybe it was because it was too complex a storyline to fit into two or so hours.

I think this story would work much better in a television series. I was just really bored and was more interested in the film finishing so I could head over to my new German course.

There is something about this movie and I can’t quite put my finger on it. On paper it seems to tick all the right boxes, murder mystery, period drama, Sean Connery as the lead and a great supporting cast (including a very young Christian Slater. The story itself is quite interesting. Great artistic backdrop and good makeup and costume designs. Yet there is just something missing.

I didn’t find this film particularly interesting. Part of the problem may have been that it automatically started playing in France, which confused me as first because I didn’t think Christian Slater or Sean Connery would do a French film. It’s also a very good dubbed copy so it took me a little while to notice that it was dubbed. So I restarted the film.

I took to google to try and read other people’s reviews to see why I didn’t quite like it and I think Umberto Eco, the author of the book, summed it up really well in 2011. He said that his novel was ‘a club sandwich, with turkey, salami, tomato, cheese, lettuce. And the movie is obliged to choose only the lettuce or the cheese, eliminating everything else – the theological side, the political side.’ I think this sums up the entire film quite nicely. In trying to produce a film from the book there are always going to have to be elements of the book lost and trimmed down in order to make a film. In this case, I think the film has sacrificed many key components and sadly it lacks enough substance or meat to use Eco’s analogy. I also think that another disadvantage of it is it is about a Monk. Connery basically plays a Sherlock Holmes in Monk form. I think had it really been Sherlock Holmes, there is something sexier about Sherlock – take Jonny Lee Miller or Benedict Cumberbatch. I just don’t think you get the same appeal as the lead character is a Monk.

Merrily Watkins (Anna Maxwell Martin) is a vicar who is also training to be an exorcist. Following the death of her husband she moves with her daughter Jane (Sally Messham) to a new Parish. The death of a particularly nasty individual in Merrily’s presence leads her open to attack from a supernatural force. Still reeling from the discovery that her husband was having an affair and the difficulty in coming to terms with that leaves Merrily vulnerable to a psychic attack.

This drama series sounded promising, it has the potential to be a really good series. However it just didn’t work. The first episode is slow and dull…which can be forgiven as it is setting the scene for the story and introducing the characters and getting you to understand their relationships. The trouble is, the episode just seems superficial and that the relationships are not fully explored, in fact the whole relationship between everyone in the drama just seems superficial. The next episode is equally dull and uninteresting and the tension and drama is not revealed until the last 2-3 minutes of the episode. This sets episode 3 to be good, however because there is only one hour left to cover everything it just seems skipped over in terms of detail and rushed. I am left feeling that in the attempt to build up to a dramatic third episode, the relationships and character development was lost in order to preserve a surprise. However this came at the expense of fully getting to understand the characters. I left like there is something I am missing throughout. I know this is the second book in the series and the started with that one. Maybe it would have been better for ITV to have started with book one and made it a two part drama. 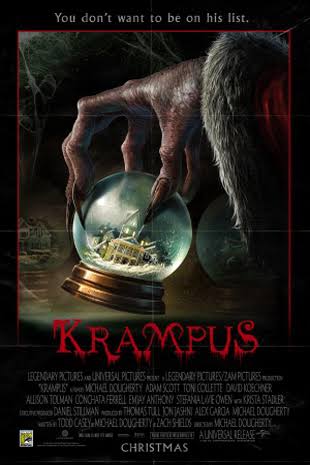 The Krampus is not something that appears within our cultural belief system, but he is very prominent in Bavarian and Austrian culture. To those unfamiliar with him, he is St. Nicolas’s (Father Christmas) helper. Whilst Father Christmas is the man who rewards children’s good behaviour with gifts. Krampus is the one who comes to punish naughty children, by collecting them in a bag sack he carries over his back and taking them away from their families. He is traditionally represented as a goat like figure, often with chains – he is believed to have an origin within paganism and the chains represent the idea of chaining yourself to the Devil and away from Christianity.

Because I am quite interested in this tradition I was looking forward to this film. I knew it probably wouldn’t be all that great of a film – it advertised it as a horror and I just don’t find horrors all that entertaining, or even scary. But I was interested none the less. The major problem I had with this film is that it seemed to hit both comical and horror angles at the same time, and missed the mark on both. I can’t understand why it tried to hit on both levels or whether the comedy with intentional or not I don’t know. Another thing I found a bit weird was the inclusion of the Grandmother he refused to speak in English to her family who was speaking English, she instead insisted on speaking German, until partway through the film she speaks briefly in English – yet she can understand and relies to English conversation?! Was a bit bizarre. Anyway, the film is ok it’s a generic horror film with a predicable storyline and the classic inclusion of one, or in this case several annoying children. It’s not one to rush to see. 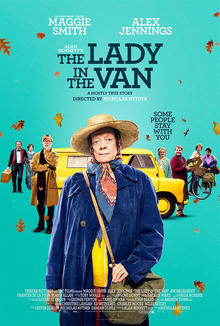 I have to say, despite the 100% on Rotten Tomatoes, I was disappointed with this film. Maggie Smith I thought was particularly brilliant, but the performances by the others, I didn’t really recommend. This script also was nothing special. In fact, having seen the advert several times in the run up to the film…I felt I could have watched that and been just as enriched. The advert itself told you the entire plot and in reality showed some of the funniest bits of the film.

I think to be honest, having seen this advert numerous ties before going to actually see the film, I had grown tired of the film before I even set foot inside the screen doors to see it.

I have to say I was most disappointed by this film. It ticks all the right boxes for me…action film, Second World War, Star studded cast (George Clooney, Matt Damon, Bill Murray, John Goodman, Hugh Bonneville, Cate Blanchett) and a real life story that was thoroughly worth sharing with a wide audience. However it was just simply boring. I kept waiting for something to happen in the film…but it was just slow and even the character development was lacking. I strongly suggest forgetting the movie all together. BUT the story is one that I believe everyone should no about so I strongly suggest you all instead dedicate 45 minutes and watch this documentary on youtube instead.